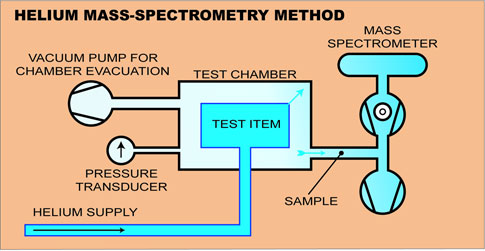 In part one of this series, we considered the pros and cons of pressure-decay testing. In part two, we’ll take a close look at a leak-testing method called “differential pressure decay.”

This method is similar to simple pressure-decay testing discussed in part one.A more accurate variant of the pressure-decay method, differential pressure testing involves pressurizing a reference volume along with a test part. The pressure differential between the non-leaking reference volume and the test item is then measured by a transducer over time, as shown in figure 1. This method requires measuring pressure at two points in time to obtain a pressure change reading. It is an indirect method of measuring leakage rate because the time and pressure data must be converted into leakage rate. This method allows you to use a higher-resolution pressure transducer. A down side to this method is that the larger the volume, the smaller the change in pressure for a given leak rate, resulting in longer test times as test volume increases. All temperature effects are the same as for pressure decay.

Differential pressure-decay testing is widely used. Unfortunately, in many instances it is the default choice of manufacturing and quality engineers who don’t understand the true cost of this type of testing. They could eliminate these hidden costs by using mass-flow leak detectors, another dry air-leak testing method that will be discussed in part three.

That said, it should be noted that for many applications at pressures in excess of 150 psig, differential pressure-decay leak testing remains the method of choice. Granted, test cycle times are slower than with single-measurement leak test methods, however, this drawback is outweighed by the lower costs for instrumentation. Basically, choosing between pressure decay or differential pressure-decay test methods involves a trade-off between cycle time and instrument cost.

In part three of “Leak Testing 101,” we will discuss the mass-flow leak testing method: how it works, and the pros and cons vis-à-vis helium and pressure-decay testing. I’ll explain how to implement this technique to get accurate gauge repeatability and reproducibility (R&R).

Note:  The above article has been reproduced from an article written by the author for Quality Digest
0